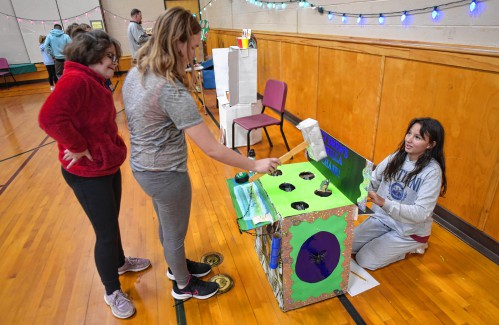 BERNARDSTON – At a typical arcade, you might expect to play Pac-Man or Galaga, but students at Bernardston Elementary School had their own ideas with their “cardboard arcade.”

On Wednesday, students of all grades could be found grabbing falling pieces of hay or hitting gorillas with a hammer as they took part in Danika’s sixth-grade classroom cardboard arcade Tyminski, closing their engineering and design unit.

Students were tasked with taking their favorite children’s book and adapting it into a game that their peers could play. Tyminski said the concept for a cardboard arcade came from the 2012 short documentary “Caine’s Arcade,” which followed a 9-year-old boy’s efforts to run a homemade arcade at his father’s auto parts store in East Los Angeles. Tyminski said having his students create their own cardboard archway was a perfect way to complete their engineering and design courses.

“The only directive was to use cardboard and things they could use around the house; it was all student-driven,” Tyminski explained as he reviewed the projects of his 24 students. “It’s a day of play and a chance for sixth graders to connect with the little ones.”

For some students, it was a chance to think outside – or, more literally, inside – the box. Liana Gauvin designed her game around the children’s book “There was an old lady who swallowed a fly”. In a sort of carnival-style game, players were tasked with tossing “flies”, which took the form of puffed balls, into a cardboard woman’s mouth, while Liana was inside the box, waving a fly swatter trying to deflect throws.

“It’s an interesting game,” Liana said, adding that the book was something she always read with her parents when she was younger. “I loved this book and I still do.”

Sophia Wood designed her game around “The Hidden Staircase”, a book in the “Nancy Drew” series which follows the detective investigating a colonial mansion. Part of the book involves the sighting of a gorilla in the mansion – which turns out to be someone wearing a gorilla mask – so Sophia adapted her game to be a gorilla mole coming out of the box.

“The ‘Nancy Drew’ series is my favorite,” Sophia said, adding that there are three different ways to play: a regular mole hit, a guessing game, and a pattern game. Sitting behind the game and controlling the gorillas coming out of the holes as the students played the game, Sophia said it was a fun way to wrap up their engineering unit.

For Jaelyn Poliski’s game inspired by ‘The Three Little Pigs’, she invited players to enter a large cardboard box where they are then tasked with catching falling hay and sticks – in the form of drawings on paper – in a game similar to money-capturing machines. Jaelyn said she and her family “did a lot” to design the game and it was a “very interesting” project to take on.

“It was a lot of fun,” Jaelyn commented. “I worked a lot of nights on it.”

Tymanski said the Cardboard Arcade was a great community-building event that she hopes to continue.

“I think it will become a tradition,” she said.