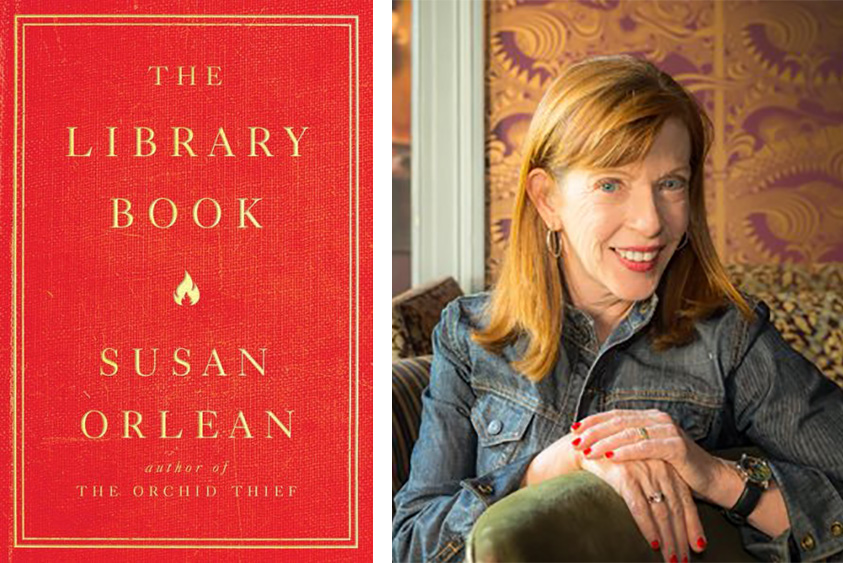 The author of “Library Book” talks about his profession, about book burning

Book lovers often have a certain respect and love for libraries.

Author Susan Orlean is one of this group. Known for books like “The Orchid Thief” and “Rin Tin Tin: The Life and the Legend”, Orleans has a knack for creating compelling stories.

His latest, “The Library Book,” delves into the unsolved mystery of the most disastrous library fire in American history. On April 29, 1986, a fire at the Los Angeles Public Library destroyed over 400,000 books and damaged 700,000 more. In the information age, â€œThe Library Bookâ€ seems to have struck a chord with readers and critics alike.

The Gazette caught up with her to talk about book burning, the community importance of libraries and some of the quirky characters she met while researching “The Library Book.”

Question: How did you start to write?
A: I think from the moment I was able to write, I wrote. I felt, even when I was very young, that it was a kind of magical power to be able to write and make sentences and make people imagine something different from what they were looking at. So from a young age I wrote little books for my parents and always loved writing homework in school. Then when I graduated from college I had this kind of fantasy of being a professional writer without any special knowledge of how you go about it. I got lucky with a job at a small startup magazine and that’s it. The minute I was able to start writing, I never looked back.

Question: You have written tons of articles and several books [since then]. The subjects you write about are sometimes unusual and [sometimes] very serious. How did you come up with the idea for “The Library Book”?
A: I was at the library one day and just started to think about the benefit of libraries [and] that I didn’t really know what went on in the daily life of a library. So it kinda banged in my head for a while and then when I heard about the fire I thought it was such a remarkable and fascinating story. It gave me a portal to write this bigger story about libraries in general.

Question: How did you start your research for this?
A: Well, I had to learn everything. I was new to LA so I needed to learn a lot about the city and its history. I really started off in several directions, just trying to read as much as I could about the fire itself, but at the same time I started to learn the history of the library and in addition the history of the growth of the city because they were so closely linked. But I was starting from scratch and all of my research began recognizing how little I knew about the subject and really starting from scratch.

Question: During your research, you have come across a lot of interesting characters. Can you tell me about some?
A: Some of the people I most enjoyed meeting weren’t alive if that counts. There were so many characters in the history of the library that I fell in love with, including several of the former chief librarians, especially around the turn of the century. There was a truly eccentric and brilliant man named Charles Lummis who was one of the most extraordinary figures I have ever written about. [He] was a book enthusiast, a bit self-centered and narcissistic and a showman but also a true genius. He ran the library for five years and really made his mark in more ways than one. He made a branding iron, like the kind of iron you would use to brand cattle, and he marked books that he didn’t think were worth reading as a way of saying “We’re going to keep this in. the library because we own it and it’s part of our collection, but it’s not a book I recommend you read. ‘ It was quite funny.

Question: So he was partly conservative, telling people, â€œYou can ignore this one. “
A: Yeah, absolutely. He had very strong feelings about what your experience in a library should be like and that included directing you to the books he found useful and stepping away from those he didn’t approve of. He was just a very extraordinary figure and, in the same way, I really adore the current director of the library, who is a very human, empathetic and inspiring guy. [He] sort of embodies what I consider to be what libraries do best, which is [provide] a sense of community, knowledge and sharing in which everyone can participate.

Question: Another aspect of your research involved book burning. What are some of the things you learned during this part of the research? Was this part disturbing?
A: It was very disturbing. I became familiar with the long and unfortunate history of book and library engraving dating back to pretty much the dawn of time. The number of books in history that have been burnt for political reasons is truly astonishing. World War II, in particular, was quite devastating for libraries around the world. Some of these libraries were set on fire because they were in bombed-out cities, but many of them were singled out and torched in particular by the German military who sought to erase entire cultures from the consciousness of the world. and that meant not only killing people but destroying people, but destroying the books which represented the culture.

Question: You mentioned that you also did your own book burning.
A: I have decided to burn a book myself in part to find out why it is so repugnant to us. It was something I found quite horrible to do even though I knew I could replace a book fairly easily. I did that too because I was going to describe the destruction of this library and realized that I had never seen a book burn. If I were to write this vivid description, it would help if I could know what it looked like. But it was very difficult to bring myself to do it. It was really something that made me uncomfortable and I thought it was really interesting that the taboo was very real.

Question: What book did you burn?
A: I engraved a copy of “Fahrenheit 451”.
Question: Do you think a lot of people in the US realize how much libraries mean and Google really can’t replace places like these, especially because they’re physical institutions?
A: I think you expressed it perfectly. Libraries are not just a storehouse of books, they have all kinds of resources and they are a physical place and it’s an irreplaceable part of what they offer, which is that public place where information is shared, celebrated. and broadcast. Moreover, not everything is online. While it is certainly true that many and many things are, it is also very true that there are many that are not online and that there is value in encountering material in the flesh that libraries make it possible.

Question: Do you think people, especially the younger generations, are realizing this?
A: Well, library visits, in general, are on the rise and polls show people under the age of 30 back the claim that there is a lot in the library that is not available on the internet. So in a way, it’s the opposite of what you would expect. Younger people seem to be well aware that there is a lot that is not online.

Question: When you were a child, what was your favorite library and which [are] some of your best memories from there?
A: My favorite library was my branch library near my home when I was young. It is the one to which I have the most sentimental attachment. I grew up in a suburb of Cleveland and it was a library branch near my home. I just have countless memories, I couldn’t even choose my favorite because I went there so often. It was really part of my life. . . every visit felt like the best visit.

Question: With “The Orchid Thief” there was a film adaptation. Any interest in [adapting] this one?
A: Yes, it will be adapted for television.

Question: What book are you reading now?
A: I am finishing “The Witch Elm” by Tana French and I have just finished “Washington Black” by Esi Edugyan.

Susan Orlean will be at the Northshire Bookstore (424 Broadway, Saratoga Springs) on Tuesday. Starting at 6 pm, she will discuss “The Library Book” with Issac Pulver, the director of the Saratoga Springs public library. Tickets cost $ 5. For more information, visit northshire.com.

More from The Daily Gazette:

“The Star Trek Craft Book” is still one of our favorites