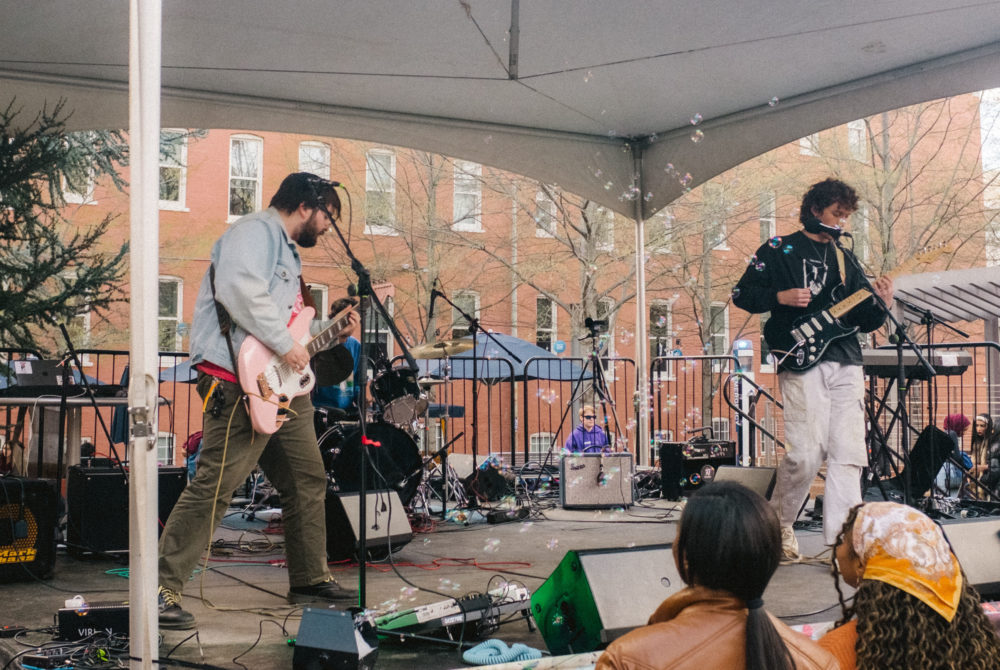 A group of four elderly people are working on launching an app called put me on, a social media and music streaming platform for independent artists to promote their work without partnering with a record label. Seniors have been developing the app since fall 2020, and the platform is currently in a limited release for beta testing before its full launch, which does not yet have a set release date.

The founders said music streaming platforms like Spotify and Apple Music are failing up-and-coming musicians, leaving room for untapped potential to give them an accessible platform. The team said that unlike other streaming platforms, the PMO will offer creative ways to build videos with snippets of songs and allow artists to go from creating their media to delivering their sound.

“As a company, our real goal is to connect listeners and artists in the best possible way,” said Sam Linder, PMO co-founder and economics expert.

The team, who first met as roommates in their freshman year, came up with the idea in 2020 during their junior year. Before developing any of the media, the group decided in August 2020 to rent a house to live together in Atlanta – where some of the founders are from – and connect with other artists in the city who they call the “mecca of music”.

Linder said the group was looking to create a more relevant and distinctive platform for today’s market, one that “fits into a niche market that has yet to be touched.”

“It turned into ‘How can we make this a platform that makes it easy for artists to share their work and their music and for listeners to easily find it in a super engaging way,'” the co said. -PMO founder, Jayden Bourne.

The team came up with the idea when Khari Crooms, senior sociology major and PMO’s chief innovation officer, found himself on his porch one day, sharing music in a group chat with his friends, who would become soon its co-founders. By scrolling through the visuals of the text feed, Crooms thought of creating a new social platform with a rapid exchange of musical ideas.

Crooms said he views the platform as a community service where artists share their work with others who have the same passion for creating music. The co-founders said artists will be able to record their sound and upload it directly to the site, allowing them to take ownership of their art and “capitalize” on their creativity.

“They also have a space where they can share and celebrate each other,” Crooms said. “I think there’s power in that, and it builds community.”

Alongside 13 other innovative groups, the team Won the 2021 New Venture Competition, the nation’s largest collegiate competition held at GW and open to students working on entrepreneurial projects with a social and technological purpose.

Founders said they helped organize an Arts Day festival last Sunday at Square 80, where artists — ranging from musicians like Head Case Band to musician connections of the Atlanta-based founders — could come together and bring untapped artists “out of the carpentry.” Linder said the festival was a “culmination” of the different kinds of expertise they interacted with in big cities, which brought a new appreciation for music on campus.

The founders said they spent a year planning the event, which drew around 500 attendees throughout the day and ultimately included interactive pop-ups, student artwork and presentations from organizations such as POPULAR! Clothes and Sunrise GW.

Platform user Zidane Dixon, who releases music as iCEYDONisaid the PMO helps independent artists get their music recognized worldwide without feeling the need to deliver a certain number of albums on time with a record deal.

Dixon, who attended the festival, said the event showcased the substantial backing band that PMO has effectively assembled, providing “versatility” on stage through the various performances.

He said he started using the app’s beta in 2020, where he found artists connected to the resources of their craft through marketing promotions, constructive criticism and potential financial help.

He said that by prioritizing student creativity on a larger scale to share with the public, PMO has inspired his work ethic, leaving him eager to stay engaged with the platform and use the connections he sought as an underground artist.

“Creative control – I think that’s the main thing to grab for it [is] for independent artists,” Dixon said.

Wyatt Kirschner, Co-Chair of the Student Music Coalition, said he was approached by the PMO team after finishing a Halloween show featuring student musicians at the National Panhellenic Council house on Townhouse Row when the co-founders asked to collaborate on planning a student music festival. . He said he already knew Linder and Crooms as on-campus music makers and soon helped organize the festival for a few months.

Kirschner said that as a student organization on campus, SMC oversaw the Student Association’s official Day of the Arts festival budget allocation — ultimately receiving a sum of $12,695 — which they used to hire sound technicians. He said of the crowd that the sound was “professional”, with loud volumes that sounded like a concert.

As a band member himself, Kirschner performed at the festival with his upstate New York-based band. Citrus maximawhere he plays as a guitarist.

“It’s really cool to see some of my friends and other musicians that I really like and know have a lot of passion for what they do, like performing or selling their art,” he said. declared.

PMO and SMC are working to create a music scene at GW that brings together an array of creators outside of the classroom space.

“I think music in particular is an interest that can really bond people, forge friendships,” Kirschner said.

This article originally appeared in the April 18, 2022 issue of The Hatchet.