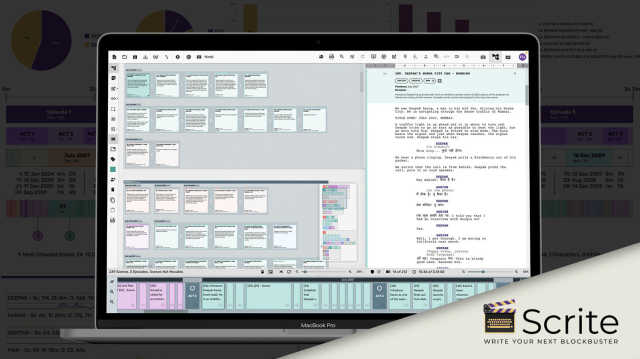 The last decade has seen a boom in screenwriting as technology has enabled more and more individuals to transmute their ideas and visions into movies and shows that are viewed by millions of people. For the writers of series and films, as well as for the public, the screenplay is king.

But how do you flesh out a storyline that does justice to its vision and meets industry standards? An app like Scrit, for starters.

When India was first locked down in March 2020, Scrit creator Prashanth Udupa started working on the app and launched it less than a month later on April 17, 2020. Its mission was clear: to allow any screenwriter to easily write professional scripts, that too for free.

In an email, Udupa explained, “An industry acceptable format is the basic expectation of any producer when reading a script. Many writers in India tend to use non-scripted apps which creates presentation issues. “

Additionally, most professional screenwriting programs cater only to English writers, while the Indian film industry produces mainstream feature films in over a dozen languages. Therefore, he said, “We made it easy for writers to switch between 12 Indian languages. “

Surya Vasishta, who oversees Scrit’s user interface design, said in the same email that the main challenge in the first few months is getting app users to trust them. They initially had to personally contact potential users. The open source application is available for Mac, Windows, and Linux users.

“The other challenge was more technical,” he said. “Even though we added language support early on, people still struggled to use it in our application as they were used to certain fonts and input methods on their computers. Once we built the technology to seamlessly integrate their existing fonts and input methods with Scrit, writing in Indian languages ​​became much smoother for everyone. It’s still an evolving feature, but it’s already usable and many of our users write in local languages.

Since its launch, developers have received a positive response from screenwriters; the cost, or the lack of it, is obviously a huge incentive. They have focused on integrating their users’ contributions and continue to upgrade the product to make it better.

“Professional writers appreciate the Structure and Insights tool, which helps them better describe and visualize their scenarios,” he added.

In less than two years, Scrit has seen steady progress. In 2021, several new writers adopted it through word of mouth. Udupa said: “Last year the SWA even gave us a platform [Screenwriters Association] to present the application to its members during a webinar. Many writers who attended the webinar have switched to Scrit and remain there to this day.

He added: “We are also working closely with a leading production house in Bengaluru that has completely gone from a legacy alternative, Celtx Studio, to Scrit for all of their in-house writers.”

The feedback the team received was instructive, as users made it clear that what they wanted was more than just a writing app. “They want to be able to map, tag and track story structures, get information and have access to tools that will help them move into pre-production,” Udapa said. “They want an app that would help them write better and get smarter in production.”

Punit Thakkar, who manages marketing and strategy for Scrit, revealed how the app makes itself unique to Indian users. Firstly, they can easily switch between many Indian languages ​​including English, Hindi, and Kannada. Second, it offers a useful statistical report that authors can use to “understand their script ideas at a macro level”.

“Scrite takes a stage-centric rather than a page-centric approach to writing,” he said. “This means that writers can organize their story in terms of scenes or sequences and visually imagine it much better on canvas using index cards that they can label with structural rhythms, while still being able to sequence them on. a timeline. This is especially useful for those who want to practice screenwriting principles they may have learned.

Srite, which is still in beta, also offers popular movie scripts to educate and inspire users and even more such scripts will be available on the app.

Thakkar also informed Cinestaan ​​that the team is already working on their next set of features that will allow multiple writers to collaborate on a single script. “With many virtual writing rooms now, this has been one of the most requested features and will be useful for professionals who want to collaborate much better while managing such rooms,” he said.

The team is also in talks with a leading Indian film school to conduct a trial run for their teachers and students.

“Going forward, we plan to create the tools necessary for writers to not only create better screenplays, but also help them on their journey from idea to discovery through the Scrit platform,” Thakkar said. .

Struggling With Debt? Four Ways a Debt Consolidation Loan Can Help You